Drifters Lodge sits in an amazing valley setting on the Kenai River. Birds and waterfowl are abundant, so a variety of species are available for viewing. Different seasons bring different species. The following lists are only small portion of the species that you could see from the lodge deck.

TRUMPETER SWANS
From the deck of the lodge see these magnificent birds arrive in early April, have their goslings and raise them until they can fly. Then, in May, watch them take off for northern Alaska, returning again in September with their young, feeding heavily and then flying south in November for the fall migration. We have had a couple years that they stay with us in Cooper Landing all winter long.

CANADIAN SNOW GEESE
These awesome birds stop by briefly in Cooper Landing in Late August through Early September as part of their migration south. They spend the summers nesting in the arctic tundra of Northern Alaska.

ARCTIC TERNS
These birds are the longest migratory bird in the world. Each year, they travel about 12,000 miles, from Northern Alaska all the way to the Antarctic. These birds mainly travel over the ocean while they are migrating. They are usually only seen during their breeding season in the arctic. We are very lucky in Cooper Landing to see these incredible birds quite often during the summer.

SANDHILL CRANES
These beautiful birds migrate to Alaska each year to breed. They meet in Nebraska, near the Platte River Valley and then all migrate together to Alaska. Its not uncommon to see a flock of 1000+ birds fly over Cooper Landing in the early Summer and then again in the beginning of September. 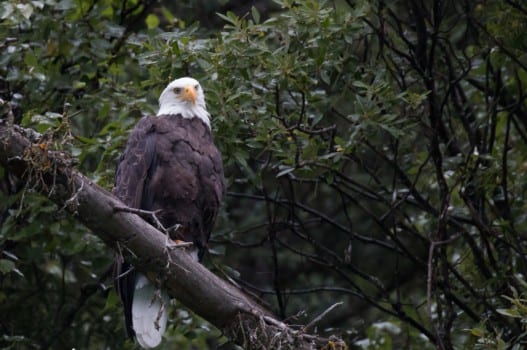 BALD EAGLES
These local birds cruise every day on the river in front of the lodge. Local nests are visible along the river in the immediate area of the lodge. We have resident Bald Eagles in Cooper Landing and they can be seen all year long.